“Quite at Leisure:” Confessions of a Re-Reader

“I walk slowly, but I never walk backward.”
– Abraham Lincoln

Summer time is leisure time and I have a couple of confessions to make.

Yes, I buy more books (new and used) than my current home storage capacity allows for, for I do love shelves that bend in the middle. And yes, my books are stacked and packed in several layers on each and every shelf. Aaand yes, my must read-list counts more books than I can actually account for. But this does not keep me from reading some of them more than once, sometimes twice, sometimes for the 6th time.

This effectively means that I just admitted to spending precious time that could have been perhaps better spent on opening new doors and exploring new literary territories or meeting up with friends or family on re-reading pages I know inside out, back and forth from cover to cover. And although I do realize that I will probably never manage to read through my constantly expanding must read-list on that account, I also know that I (for acute existential reasons) sometimes need to go slow and go back to the stories I already know so well. Again. And again. It’s true that devouring new and unfamiliar texts is an exciting and most favourite activity, I won’t deny it, but there is nothing quite like re-visiting that familiar wonderland of books that at one point made such an impression that they instantaneously qualified as most treasured friends; Treasure Islandis one, and the book that initially made me want to work with and study Literature, John Fowles’ The French Lieutenant’s Woman, is another (chapter 13 is a particular favourite – sometimes I simply open the book to just re-read those pages. If you have a thing for metafiction as well, you’ll understand why).

#2 I sometimes buy different copies of the same title if I like the cover of the new edition or there is a dispute between the British and American translation (!!)

In fact, it has become a summer tradition and synonymous with the ultimate leisure time. I always read the book (notes, introduction and all) the first Saturday in June and then watch the movie and/or the BBC-series. That’s a lot of Darcy in one day, I know, but I love it! 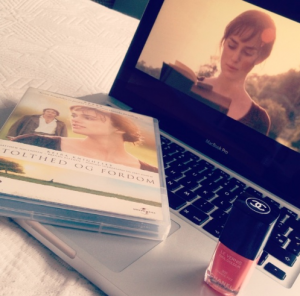 The funny part is that when I share this tradition with others, people tend to get kind of disappointed in me, or that is how I interpret the rather disappointed look they give me when I explain that there is a special lightness and almost buzzing summer vibe about the novel. I don’t know. Maybe it’s Lizzie reading-and-walking in the rain over the damp fields, or Darcy “struggling in vain to repress his true feelings, asking her to allow him to tell her how ardently he admires and loves her,” and Elizabeth answering him with “cold civility.” It’s most definitely the language, the meticulousness of the phrases and the depth of the semantics, but it’s also a mood, a slow June mood. At least to me. But people always seem to frown as if they are disappointed that the book I returnto on a yearly basis is in the so-called light lit department. For some reason, they would expect me to choose something more heavy to re-read: “if you absolutely must re-read something, pick a book which is deeper or has more insight. For God’s sake!” the disappointed look seems to say. But maybe I don’t need Proust on a damp summer day in June. As I said before, summer time is leisure time, and I do so relax in the company of the Bennetts and Bingleys, the balls and the superfluous fuss about social etiquette. Like it or not, that is how I choose to spend my spare time every first Saturday in June, I totally own it, and as Mr. Bennett says at the end of the story, “I am quite at leisure.” <3

… the greatest threat as he saw it was Time, our spare time
– how we spend it; do we read or do we not?

On that note, I want to say something about Time and going slow. A few years back, I attended The Children’s Conference arranged by The Bookseller at the South Bank Centre in  London. There, in the midst of the merry-go-round and the London Eye ferris wheel, I joined a couple of hundred Kiddie Lit lovers, professionals and enthusiasts alike, who had come from all over the world to share and discuss the current state of children’s publishing, trends and trade secrets, as well as debating speculations and predictions about the future of children’s literature. It was my first (self-financed) conference abroad and I was so excited to meet other booknerds trained and licensed to go geekish on this shared passion for an entire day. There were editors from all the big publishing houses, Random House and Harper Collins, sharing insights into what they believed to be the next big thing. There were representatives from smaller and (at the time) lesser known publishers, who began their key note with the opening clip from The Lion King (sound on) as a way of describing the thrill of giving birth to a new book. (For a children’s conference, the Lion King reference did seem appropriate).

Towards the end of the conference, a panel discussion about cooperation vs. competition in publishing summed up the day very precisely in a point about the necessity of having the actors of the industry working together to secure a steady stream of readers in the future. “How do we maintain children’s interest in books in a still more digitalised world?” was the question of the day.

And in the panel, Jeff Norton, a well-known British children’s book author, said something very true about the concept of competition and the way we tend to barricade ourselves behind trade secrets and the hunt for the next big sell. He said that current trends and business secrets take up too much of our attention and that publishers and booksellers shouldn’t worry so much about competition from Amazon, because the greatest threat, as he saw it, was Time, our spare time – how we spend it; do we read or do we not? 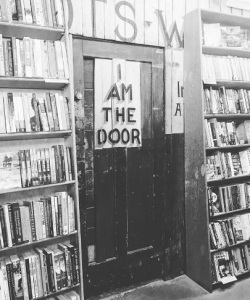 So, no matter if you (re-)read the classics, the queer or even cartoons, or if you read fast or slow, I will applaud you for simply reading. Reading is sharing stories, it’s what keeps us moving forward. And as for re-reading, I wouldn’t worry too much. As most of us know, you never read the same book in the same way, because you will always have moved a little yourself in-between readings.

Thus encouraged, I wish you the best of summers and happy re-reading!

I am Raising A Reader!

The Urge to Rewrite Literary History. Why?