I want to share my first time with you.

A wooden bench in St. James Park, London. June 14th 2013. A sunny day, ducks in the pond and that sweet smell of summer, and then ahh. Pure pleasure.

Let me repeat that for you:

You came to me this morning
And you handled me like meat.
You’d have to be a man to know
How good that feels how sweet
My mirror twin my next of kin
I’d know you in my sleep
And who but you would take me in
A thousand kisses deep…

As a lifelong reader and S.U.C.K.E.R. for all things #bookish, words have always had a special impact on me. Yes, I’m the type of reader who literally tastes words by repeating them slowly while smiling blissfully and who collects the rare and funny ones in a little exclusive notebook. Just because. But while I have always been a hungry reader devouring one novel after the other, poetry – for some reason – was always quite a struggle for me.

[…] poetry gave me nothing more than shortlived satisfaction and headaches. I tried, but in vain. Analysing poems for school papers made me sick with looking for meaning where I found nothing but abrupt sentences and banal metaphors.

Like many other school kids, I saw poetry as a chore and something I had to endure in class. Yes, I found some joy in trying to write my own rhymes, but that too always seemed so unfulfilling. The joy was shortlived. I never quite got it and I didn’t bother with all the end rhymes and iambic pentameter. “Get over yourself with all that emotion.” Here was a genre that didn’t resonate with me at all, and for years, I completely ignored every text that just smelled like poetry. I was more into grand novels with elaborated plots and rich and detailed storylines that would take me on faraway journeys into the imaginarium – books that would let me travel around the world in and out of the literary wonderlands, across time, history and cultures. And while these books would stretch the word love for hours on end, poetry gave me nothing more than shortlived satisfaction and headaches. I tried, but in vain. Analysing poems for school papers made me sick with looking for meaning where I found nothing but abrupt sentences and banal metaphors. It was not easily accessible – and quite frankly, I was kind of bored.

That was until that day in June of 2013, when as a 28-year-old, I found myself alone on a wooden bench in London longing for something more, something inexplicable and unspecific. Something greater and better.

My admiration for Cohen’s writing doesn’t start there, though. His music has always been part of my family’s soundtrack. “Bird on a wire”, “Suzanne”, “I’m Your Man”, The Future”, “So Long, Marianne”, “First We Take Manhattan” and so on are all songs that I know by heart, because my dad would play that tape on repeat, while preparing pasta in the kitchen or painting panels in the living room. In that sense, Cohen’s sound is part of my childhood DNA, but I have never actually listened to the words – until relatively recently.

Suddenly I saw how poetry can be pure and straightforward and still retain that intensity and intimacy that resonates so deeply with me.

On that summer day in London, Cohen changed poetry for me. I had bought Book of Longing at Daunt’s Books for Travellersin Marylebone, and my wanderings around London took me to this special place in St. James Park, where everything just fell into place and the words sang my body electric (as Whitman so beautifully put it) – it just struck a chord in me. Cohen doesn’t narrate stories, he tells tales of human experience in snapshot-like expressions. Take a couple of stanzas from the title poem:

The Book of Longing

I know she is coming
I know she will look
And that is the longing
And this is the book.

Here was a poet that was able to capture a(n unknown) longing in me without dwelling in the metaphorical drama and linguistic ornamentation that sometimes feels superficial. It was like getting a brand new pair of eyes, a new poetic consciousness. Suddenly I saw how poetry can actually escape the banality of emotion and be pure and straightforward and still retain that intensity and intimacy that resonates so deeply with me. My page is too white, my ink too thin. Just taste that for a moment. After this poetry bench experience, I found myself craving more words, more poetry and my desire took me to those fabulous wordsmiths of Louise Glück, Rupi Kaur, Walt Whitman and others. Even good old Ovid! And it was and still is sooo satisfactory. I think I finally get it.

Since he opened that poetic doorway for me, Cohen has taken a very special place on my poetry shelf. And I am forever grateful. Take another poem from the book:

I am a huge fan, yes, but by no means a Cohen expert, and I’ll admit that I haven’t read everything he has written – which besides his music is quite an oevre. 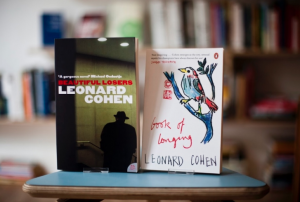 At Ark, we stock Book of Longing and Beautiful Losers, the last of which I haven’t read. Yet. I’ve decided to fight my desire to read it all at once, and try to read my way through his pencilings and doodles slowly (in Book of Longing, the poems are accompanied by Cohen’s own doodle illustrations). I want to enjoy those powerful words and phrases bit by bit. I want to stretch that pleasure of a newly discovered Cohen phrase, so that I don’t risk running out of new poetic surprises all to soon. I want the pleasure of his words to last.

Cohen has taught me to read more slowly and to listen louder, and it has profoundly altered the way I read books and listen to music.

In a recent interview, Cohen (at 82 years) said: “The fact that my songs take a long time to write is not a sign of excellence. I am very slow. That’s just the way it is.” And I take his advice. We should accept the slowliness of poetry and just take it in according to our own metronom. I’ve come to love that about poetry. It takes time. Cohen has taught me to read more slowly and to listen louder, and it has profoundly altered the way I read books and listen to music.

When Bob Dylan was recently awarded the Nobel Prize for his new poetic contributions to the American song tradition, some literary voices responded with wonder that the prize hadn’t been awarded to Leonard Cohen for being the better poet. I’m no Dylan expert either, nor have I listened enough to judge if he’s a better wordsmith. Taste is individual, and all I can say is that Cohen is my star poet any day. And I can only encourage you to dig deep into the Cohen universe, it’s so beautiful and rich in all its simplicity, and he’s is so humble in all his grandness [fan over-and-out!].

To new readers (as well as old) I want to leave you with a teaser. It’s my favourite Cohen song presented here in Madeleine Peyroux’s somewhat more jazzy interpretation, but the lyrics are Cohen’s and they – as he recently said in an interview – are likely to last forever.

I know I’ll carry his words with me.
Always.