Can You Paint Your Concept?

For the past few months, I’ve been working behind the scenes on the transformation of my freelance business into an independent & full-time consultancy. And while I have been formalising procedures, bank accounts and VAT numbers, I’ve also been seeing a coach & business mentor, who very elegantly has made me reconnect with my roots (& routes?) and my core values. And in the process, I’ve come to think a lot about oceans, waves and the value of ripple effects.

You’re not just a wave, you’re part of the ocean.

A favourite quote from one of my favourite books, Tuesdays with Morrie, written by Mitch Albom about his reunion with his old college professor, who’s dying from ALS.

I first read this book when I was 16. For a little less than 20 years, the wisdom of a dying American sociology professor has served as my bookish mentor in almost all phases of my life up until this point. It represents my first experience with random book picking and it is also (perhaps) THE most important book I have ever read.

I was 16 and I had just started my first job at Borgen Publishers, where one of my first tasks was to clear the stock warehouse of books, as the archive was to be removed to a different location with much less space. So I literally spent 3 weeks throwing out books. Yaiks! Of course that hurt and I ended up taking home two books for every one book I threw out. But if there ever was a book I was meant to pick out at random, this was the one. And as I read and re-read it and passed it on to my family and friends, it has become our go-to book, an oracle, whenever life gets tough or we need a bit of perspective on whatever hardships we may face. The school of life, ya know.

The book in itself is nothing big or literary, it is a very simple story about a sports reporter, who reconnects with his dying sociology professor and meets with him every Tuesday to talk about everything big and small concerning life, death, love, freedom, regrets, family, emotions, marriage, forgiveness, anxiety, money, culture, etc.

But even though the story is simply told, it is nowhere near banal. Morrie, the coach, is so vibrant and full of life although he is in fact dying. The contrast hits you straight in the heart, and as he passes on one comforting and life-affirming aphorism after the other, we’re reminded of the simultaneous beauty and fragility of life, as we follow Morrie coming nearer and nearer to the end. “Dying is one thing to be sad about, living unhappily that’s another,” “we must love one another or die” (quoting W. H. Auden) and “you’re not just a wave you’re part of the ocean” are just some of the wisdoms that Morrie shares with us. The story is so quietly intense and beautifully written, and it basically changed the way I think of adversity, setbacks and hardships and how I work to overcome them when every once in a while life strikes hard.

So, yeah. Waves and oceans. And coaches.

For as I said, for the last couple of weeks, I’ve been seeing my own version of Morrie – a coach & business mentor, who guides me through this start-up phase of formalising my freelance business. The learning curve is wonderfully steep and I’m challenged & learning something new every day. And I have this sneaky feeling that he has called my game and seen how, as a bookseller-academic, I instinctively think with words. Because one of the first things he introduced me to was an exercise of painting thoughts instead of explaining them.

Can you paint your concept? he asked.

What a great idea! was my initial response. Then, upon reflection, what the h… am I going to paint? A thousand ideas popped up and I immediately began overthinking the symbolic features I would include in my drawing, the metaphors of the colourful visual I saw before me. But then through the roars of my noisy monkey mind, a simple and clear idea of the wave and the ocean began to sparkle and I was thrown back to a workshop for consultants in-spe that I attended a few years back. Here, the warm-up exercise was to pick a random photo from a pile of photos spread out on the floor. Really neat business men and brief cases, secretaries in high heals and glass-framed penthouse offices, executive meeting rooms, champagne bottles, sunshine, sun glasses and bunnies in hats lay side by side on the dirty, greyish floor. None of these photos spoke to me. But then, in the middle of it all, there was this photo of a kayaker gazing towards the horizon. I picked it up and I just knew it. This was my photo. 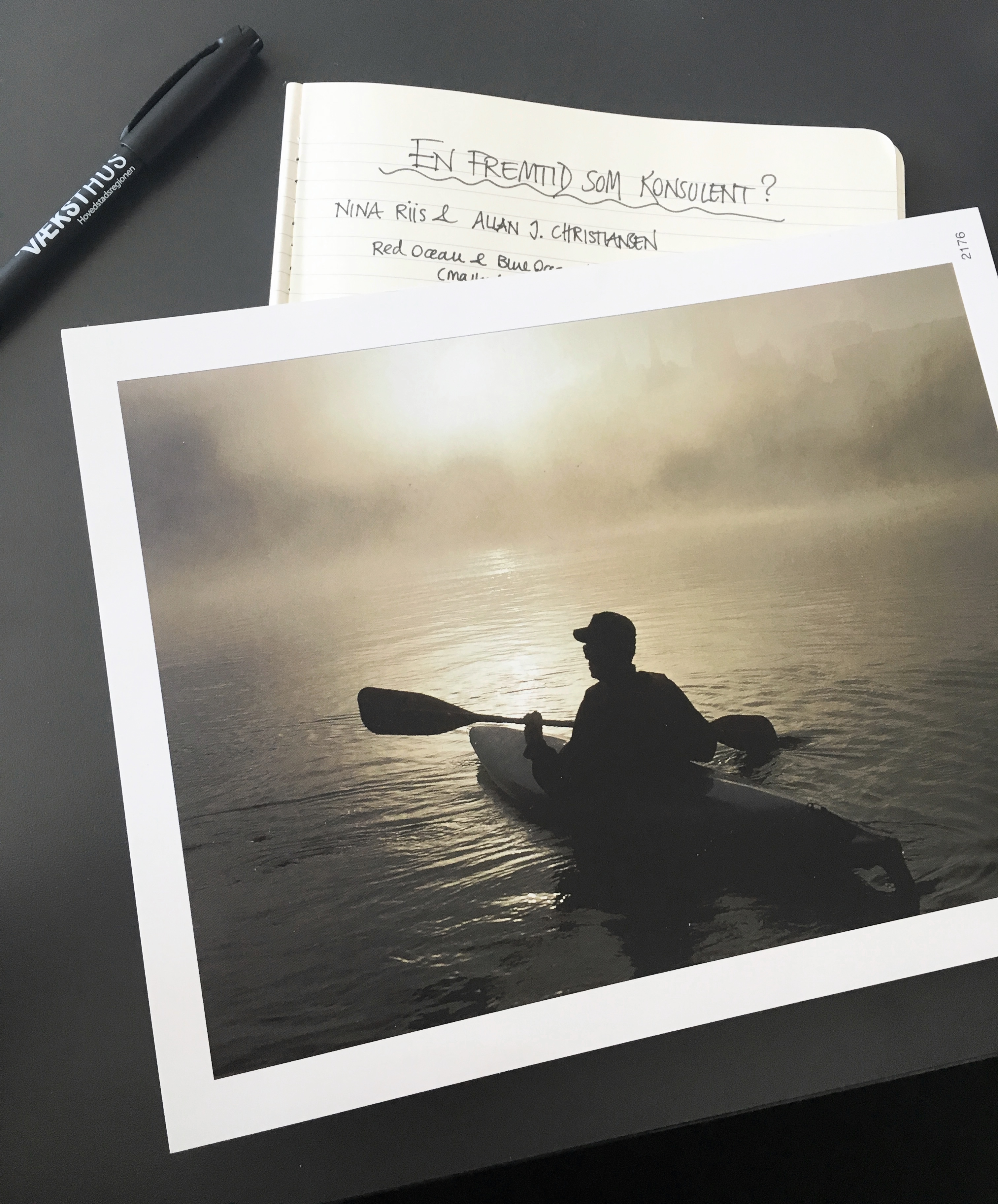 So when my coach asked me last week if I could paint my concept, the concept of the kayaking navigator felt just right: the ripple effects; the ideas & shared stories that move minds, people and communities; flow & self-awareness; the calm water, the contemplation, deep thinking & feeling of immersion that come from unplugging with a book; the harsh realities of being on your own, knowing your strengths & weaknesses and balancing the two; the bookish frontier & digital future in the horizon and the sense that anything can happen, that everything is doable; the metaphor of finding your element & trusting your gut feeling and your ability to simultaneously thrive and navigate complexity in a blue ocean of possibilities, creativity and creation – I love everything about this photo and it embodies everything that I am and everything I want my business-self to be.

So, when my 1,5-year-old daughter and I was playing with paint the other day, this is what materialised on my paper. 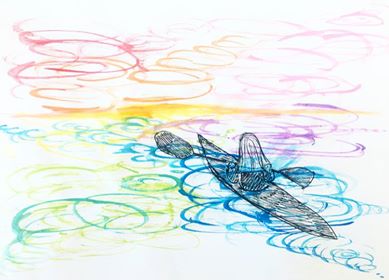 Can you paint your concept?